skip to main | skip to sidebar

I defer and apologise to Alan Sillitoe for borrowing the wonderfully dramatic title of his novel published in 1953 to incorporate its force to the experience of my long term illness. I suffer from Chronic Fatigue Syndrome which in itself is not a diagnosis but a short phrase to indicate a collection of symptoms.
This Blog is therefore a harrowing recounting of long term illness. It is not for the faint hearted who hate hearing bad news, and avoid sick people, even if they are close friends or relatives.
I am running a race against time and I am not likely to win it. I have therefore decided to chronicle the progress of my long term illness provisionally called Chronic Fatigue Syndrome (CFS). One calls it an idiopathic illness, i.e. cause or origin unknown. One day you are walking down the street, humming Beethoven’s 9th in an ascending mood, in a body not too stressed, and the next day or week you begin to feel peeved at what appears like a hangover, a bad night of sleep, aching muscles, and foggy head, some lack of balance, burning skin, and unexpected shutdown of libido. You say to yourself – an early night would resolve all this. But the foe has come to stay and invade your body bit by bit. Soon you are exhausted all the time, you cannot fall asleep or stay asleep. You begin to realise with gathering terror that you are caught in a downward spiral. Lack of sleep makes automatic body healing impossible which in turn amplifies the force of symptoms and precipitates some more.

Someone asked me once, disbelieving the floridly symptomatic expression of my illness, what it felt like to be so “profoundly ill”, with no sense of balance, head in a brain fog, muscles in constant spasms, legs blasted in an electric sand storm, Being a prisoner is one’s own uncomfortable body is familiar to most of us but for short periods. This sets me thinking in an epigrammatic trawl for suitable metaphors. How indeed does it feel to be long term ill?

I can extrapolate my answers from my weekly one hour one to one counselling session with my counsellor who is a kindly American lady. I tell her that it feels like being locked up in a lift at the bottom of a coal mine, with finite amount of air and precious little oxygen and forgotten by everyone. It also feels like being locked inside a safe, confronted by a door without a handle, one’s only means of exit. We do a verbal dance around a chiaroscuro of scintillating metaphors to see if I could disentangle myself from these fearful images and return to a proportionate world of reason, an acceptance, a bit of Buddhist let go. I also feel like a character in a Samuel Becket play on stage but alone and waiting for Godot or would it be an unmasked God in all his unreason showing his cruel and terrible face?

Having a mate and partner, a spouse to share your retirement is a profoundly reassuring experience for most. My partner, carer, wife has the public profile of a widow. She loves walking along the wild and beautiful North Kent coastline 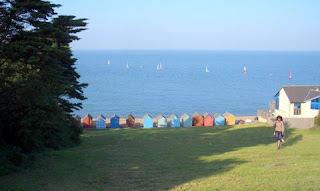 facing the formidable and moody North Sea, but she walks alone. All the dog walkers of the rugged bay must be familiar with this handsome 60 something with her birdwatchers binoculars and a small silver slab of a digital camera, a school girl mini ruck sack, walking alone each day scanning the sky for a sighting of some rare bird. She finishes her hour long walk at the local village coffee shop with her daily Guardian, alone in a corner doing her obligatory easy cross word. This along with scrabble she believes keeps Alzheimer’s and dementia at bay. I am at home anxiously craning my neck for her reappearance each day 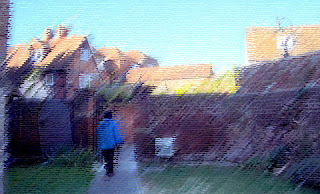 often fearing the worst. What sustains me and keeps me alive is the dogged belief that someday I would be able to walk beside her, holding hands and sharing a joke, sharing the silence of the sea that keeps reappearing through a block of trees and traditional hedges that discreetly hide sumptuous English farms. The French do not screen their undulating landscapes with hedgerows, but allow the pacific majesty of their countryside impact on you senses in the fullness of their sweep like an Impressionist painting. The North Sea stretches as far as you could see.

Last year I had a unique experience in Northern France where they grow corn and wheat on vertiginously sloping hillsides. On harvesting, golden stubble forms a sea of its own with a giant wave of yellow seeming the rush towards you like an imminent awesome Tsunami. The world is about to do a giant tumble over you as you drive on the rim of these vast gold stubble fields. Once whilst being driven in a car past such a tilting landscape near Blanc Nez with freshly cut golden straw compressed in large rollers visually rolling towards you, I freaked out and closed my eyes and screamed in silent terror. I was looking at the terrible face of beauty, as Milton who was blind might have said in Paradise Lost.

I digress from chronicling my experience of dealing with CFS. After 3 unforgiving and relentless years of suffering, worse was yet to come. My neurologist was the messenger who brought me the terrible news from God himself. CFS was a mere teaser. Does God rub his hands in glee when announcing terrifying news? My Consultant Neurologist certainly appeared to……..
Posted by Ken at 11:20 AM 5 comments: